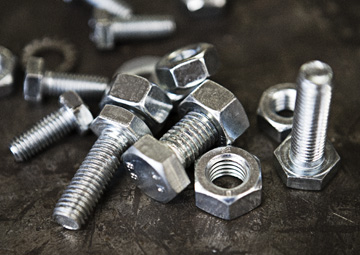 Not re-testing fastener stock to DIN 25201 could cause product ranges to become obsolete. The following explains the important differences between DIN 25201 and its predecessor, DIN 65151, when conducting Junker Testing of fasteners for self-loosening behavior.

A new age of fastener testing was heralded when in 1969, Gerhard Junker published his classic paper, New Criteria for Self-Loosening of Fasteners Under Vibration, in the Transactions of the Society of Automotive Engineers. The Junker Test, as it became known and was later prescribed by the original DIN 65151, tested the self-loosening behavior of fasteners under transverse loading conditions by vibration testing. It has been a byword of trust, safety and security in the fastener industry.

But now that has all changed, with the publication in 2010 of the new DIN 25201. Certainly, the new DIN standard builds on the original DIN 65151 defined by Junker, but takes things much further in setting out exactly how to conduct vibration testing of fasteners. For the first time, the new DIN allows researchers, test engineers and clients worldwide to conduct fastener vibration tests that genuinely compare like with like. This also gives greater confidence to engineers specifying components, because the testing standards of critical fasteners are so much tougher than under DIN 65151.

But there are still manufacturers and customers in the fastener industry unaware that the old standard, DIN 65151, has been superseded, and that a much tougher new test regime is in place. They are in danger of losing competitive advantage, and their products could simply drop out of the market. That’s because, unless a re-testing program is initiated, many fastener products lacking test certification to DIN 25201 will begin to disappear from engineers’ specifications.

While the original DIN 65151 only specified that vibration testing must be conducted using a Junker Test Bench, the new DIN 25201 sets out exactly how the testing must be completed. It introduces new mandatory requirements to conduct reference and verification tests that compare the self-loosening behavior of bolted joints, requires the use of a washer during testing and sets out strict test reporting procedures.

Vibration testing must be completed using a test block that, when the schematic provided of the test equipment to be used is examined, is to all intents and purposes a Junker Test Bench. And a considerable advance on the old DIN test conditions is that the new test must match the likely application and operating conditions of the fastener as closely as possible.

The first stage of the test is called the ‘reference test’. The aim is to discover the effective displacement at which the bolt starts to self-loosen, so that the performance of the securing element, or locking mechanism, can be effectively tested. The rest of the testing program will depend on this initial stage.

A Washer Meeting Specific DIN Standards Must be Included

The new DIN spells out in detail that the test fittings should include the bolt and nut in standardized dimensions, and a washer, which is another new feature. The washer is now included to play the part of the surface that would normally support the fastener when used in practice. All test subjects must be new, unused and not previously tested or stressed. They should conform to a manufacturer’s standard product specification so that the results can apply to a range of standard fastener products made of the same materials and to identical specification. The quality standards of the test fittings should be in quality categories A or B.

Even the washer’s parameters are detailed. The parameters must be compliant with DIN EN ISO 7093-1, the surface of the washer must be ground, with the roughness also complying with DIN 7093-1. Its shape and flatness must comply with DIN EN ISO 4759-3. The washer’s contact surfaces should be coated with molybdenum disulfide paste and its hardness must be in the 200 HV (Vickers Pyramid Number) ranges for strength grades up to 8.8 and 300 HV for strength grades above 8.8. During testing, the washer should be fixed in place and not allowed to turn. All these requirements are new and much more demanding than previously.

Maintaining consistency is very important, because the test report (detailed on next page) will require the exact test conditions to be precisely recorded. Clearly, just with that covered so far, the new DIN 25201 already exceeds the requirements of the old DIN 65151. But we are just getting started.

The objective of the next stage is to test the performance of the securing element of the fastener and to find out at what point it starts to loosen. There are some important points to note here. First, there must be 12 verification tests for each set of measurements recorded from the reference test. This is a significantly greater requirement compared to the old DIN 65151. It can also be a painfully slow process with some Junker Test Bench models that require manual operation and set-up.

Each verification test must be performed on the fastener, with its locking mechanism in place, either until it loosens or 2000 load cycles have been completed. The 12 tests must measure and record the following variables:

Crucially, the test results can only be used for the specific diameter of the fastener being tested. This might seem like an obvious point, but under the old DIN 65151 testing regime, which did not impose this requirement, many manufacturers only tested the securing effect of their locking device on one diameter of their fastener range. It was then assumed that the results of the Junker Test on a 5/16 bolt, for example, were probably okay to apply to a 7/16 bolt. This is no longer acceptable, meaning fasteners rated on this basis will fail the new DIN. And it also means that many manufacturers’ product ranges will require re-testing to the new standard, if they are to remain on specification lists.

The DIN says that the securing effect of the locking mechanism is considered to be ‘adequate’ if there is 80% or more of the pre-stressing force, from when the test started, remaining after 2000 load cycles. So when demonstrating the performance of locking mechanisms to potential clients, it is important to show that the fastener is still tight in its test bed.

Another major departure from the requirements of the old DIN 65151 is the reporting procedures. Effectively, what the new DIN 25201 demands is much greater rigor when recording test results. However, despite the extra effort, the benefits of this new approach are considerable.

The new test report requirements will not only provide customers with data about the products they are buying, but will also allow researchers and test engineers to exchange data about locking device performance with much greater confidence.

From the outset, it should be known that detail is a key factor. The test report must first describe which test fittings were utilized in detail and include the number used, their dimensions, material and surface designations and quality categories.

The type of locking mechanism and its fitting position must also be described. Next, the DIN asks the test technician to record the:

The following report specification could be challenging for many, as it asks how the test equipment has been constructed. This could be problematic for some manufacturers, researchers and test-houses that use nonstandard test rigs, as it is likely to cast doubt on the validity of the test results. But if a Junker Test Bench from a test equipment manufacturer has been used, then the specification manual that comes with the equipment can be used to detail how it has been constructed.

Clearly, one of the most important parts of the final test report is the plot of the pre-stressing force against the number of load cycles. This is important because this data demonstrates the effectiveness of the fastener locking mechanism. There are now Junker Test Benches available that can automate this element of the reporting process. The benches can even provide the data in a time series, together with a graph in real-time during testing and then output the results into standard file formats. That makes it particularly easy to import the information into users’ and clients’ preferred analysis software.

Equally important is the final part of the report. This should detail the exact conditions under which the fastener’s securing element can be used, and if the test determined this, the level of pre-stressing force at which the fastener can be expected to fail. Details such as lubrication, surface coatings and the range of diameters are also requested.

The new reporting requirements of DIN 25201 mean that some models of Junker Test Benches and many test rigs will simply be unable to provide the level of detail required, nor in a format that can be easily converted into a report format.

There is no doubt that DIN 25201 represents a significant advance for the fastener industry. It will ultimately lead to higher quality specifications and higher quality fastener securing devices and products. Engineers will have greater confidence when specifying fasteners that have been tested to, and shown to comply with, the new standard. And research and development teams will have greater confidence when exchanging data about the performance of specific locking mechanisms.

There will also be a requirement for some manufacturers to rapidly update their product testing/compliance to ensure that all of their products qualify under DIN 25201. Not to do so will lead to their products simply being removed from specification sheets.

Fortunately, there is now a new generation of affordable, yet advanced high specification Junker Test Benches and demonstrators available. These can help make this process smooth and swift, ensuring that the safety and quality of fasteners and locking mechanisms meets the most demanding standards of the new DIN 25201.